Trivia: What Walt Disney World Resort had to halt progress on construction due to the September 11th attacks on the World Trade Center? 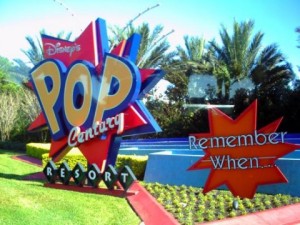 The original plan for the fun and funky, retro-themed Value Resort was to have a second phase themed the Legendary Years from 1900-1940. It was to be located across the lake from the now Pop Century Resort and would be connected by a bridge. However, after the 9-11 tragedy, followed by a drop in tourism, Disney decided to halt all expansion plans, leaving the hollow buildings that were started looking sad and desolate.

But hakuna matata, my friends, because there is good news on the way! Set to open in the Legendary Years location in Summer 2012 is the new Art of Animation Resort! It will be a bright and brilliant resort themed after Disney’s The Lion King and The Little Mermaid, and Disney Pixar’s Cars and Finding Nemo! [Squeals with excitement!]

Bonus Trivia: Can you guess where we will be staying on our 2012 September Anniversary Trip to Walt Disney World!?!