I’m so glad I am finally getting to post this…a week late! 🙂

Last weekend, Tim, Jack, my friend Julie, her husband Chris, and I all went down to Disney’s ESPN Wide World of Sports to see the Braves play a Spring Training game! It was another short trip, this time with an eight-month-old in tow, but we really did have a great time.

Growing up in Atlanta, when it came to baseball, my husband and I were born and bred Braves fans. Both of us attended games at the old Atlanta-Fulton County Stadium that was torn down in 1996, and have attended countless games since then at the now Turner Field. The Braves have been training in Walt Disney World since 1998 and ever since Tim and I have been married we have said that we wanted to go to a Spring Training game together down there. This year was our year.

On Thursday evening we packed our Nissan Altima (lovingly nicknamed by me, our Alti-mama) to the brim with the bare necessities for a weekend of four adults and a baby. Julie’s parents own in RCI, so we had a two bedroom condo with a deal they got through them and stayed off property. There was a little bit of drama that came along with it that I won’t go in to right now. Just know that at the end of it, Tim and I still stand by our “Stay on Property” motto.

By Friday afternoon we were rarin’ to go, all decked out in our Braves attire. The game started at 1:05pm, and due to that pre-game drama I mentioned, we made it to the stadium just in time to see Mickey Mouse throw the first pitch! 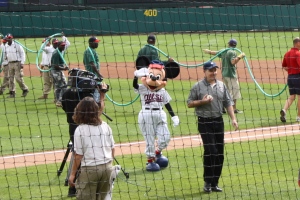 We had great seats, thanks to a wonderful family we know from our church. You can’t find nicer people anywhere. 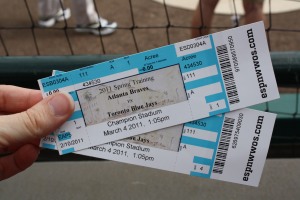 Next, the National Anthem was played by a baseball-clad quartet, and the game began.

We had a blast! 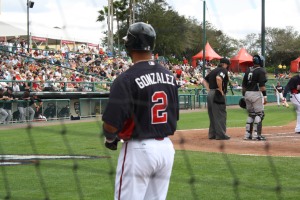 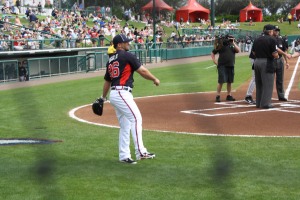 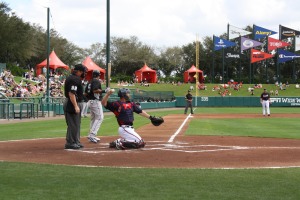 With front row seats and a ballpark hotdog in hand, life really couldn’t get any better…until Tim and Jack caught a foul ball, that is! It hit behind us and then bounced forward. I honestly don’t know how Tim caught it, who was holding Jack at the moment. I wasn’t looking because I have a fear of getting hit in the head by foul balls, so therefore was pressed into the netting in front of me with my eyes closed tight. (I know, lame. But what can I say? I’m a girly-girl. I don’t do sports. I just watch some of them.) The next thing I knew the crowd was cheering and Tim was standing there with Jack on one hip and the ball raised up in the opposite hand! Yeah…my husband’s a stud. 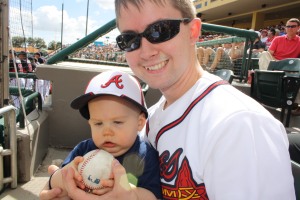 Jack just wanted to eat it.

The final score was Blue Jays, seven, Braves, five. In the Elrod Book of Fun Disney Days, however, it was a total win! 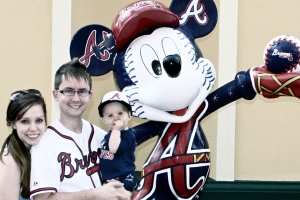 Nothing better than Mickey Mouse and Braves Baseball! Go Braves!