And yup. I usually do Fun Fact ‘n Trivia Fridays.

Oh well…it’s been a busy week and yesterday was a busy day, so I guess you can say I’m just switching it up…making it interesting…or causing confusion…

Either way, I decided to make up for my missing post today! Today’s fun fact actually took place yesterday, so it makes me super bummed I didn’t get a chance to tell you about it until today. Yesterday just happened to be the official grand opening of the newly refurbished Star Tours attraction at Disney’s Hollywood Studios!

Star Tours is a Star Wars themed virtual race-through-space ride. Originally opened on December 15, 1989, it was closed in fall of 2010 for some much needed refurbishment and updating. George Lucas himself was in Walt Disney World yesterday for the grand opening, and declared the new ride “sensational.” Also on the scene were Anthony Daniels (the original voice of C3PO) and many Star Wars characters, both heroes and villains.

Updates include a new queue, new 3D technology, and high-speed, adventurous travel to many Star Wars hot-spots like Tatooine, Naboo, and even the Death Star, so expect appearances from many of your favorite Star Wars characters. Before making his exit from Walt Disney World, Darth Vader instructed his crew to set their sights on the “Anaheim System,” so look out all you Disneyland goers for the new Star Tours set to open out there on June 3, 2011!

I have always enjoyed the Star Tours attraction, so I am super excited to ride this new and updated version! I can’t wait to see all of the changes for myself. However, it won’t be “in the stars” for me this September because (second fun fact of the day!!) Tim and I are expecting our second child! I will be about six months pregnant when we go this fall, so riding won’t be recommended for me. 😦 Oh well…I’ll get the scoop from Tim after he rides!

And as for going in 2012 with two kids ages two and nine months….well, “may the Force be with me,” I guess! 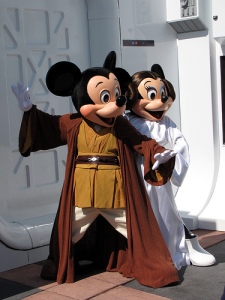