“Good morning, Disney Wooooooooorld!” I might have actually woke up less grouchy that morning. Waking up six days in a row in WDW does something to your soul. Jack and Tim were getting used to their morning “walks” down to Roaring Fork every morning, too. Whenever one of us would try to bring up the fact that the next day was our last full day, the other would “Shhh!” the said Debbie Downer immediately. “I’m trying not to think about it!”

{Taken from Tim’s phone coming back to the room after the NMR bottle warming. Love this resort. So peaceful and calming.}

We had it on the original agenda to spend this morning bumming around the resort and enjoying a little more pool time, but last minute Tim decided that {since it was literally dirt cheap to add} it would be better to add one more day of park tickets to our package and go into Magic Kingdom again.

So we did. We got up, packed up the stroller, and took a cruise across the Seven Seas Lagoon to MK. Once again, we made it in time to watch the opening ceremonies…after I spilled my whole mug of coffee in the bag check line. Ugh. The security guard was so nice, though, and helped me clean up the mess and gave me a towel to dry our belongings, as well.

We didn’t get too crazy or go too fast. We took our time. We hit up some of Jack’s favorite rides and added in a few new ones {Buzz Lightyear’s Space Ranger Spin, the People Mover — ahem! the Tomorrowland Transit Authority, excuse me!, the train, etc}. 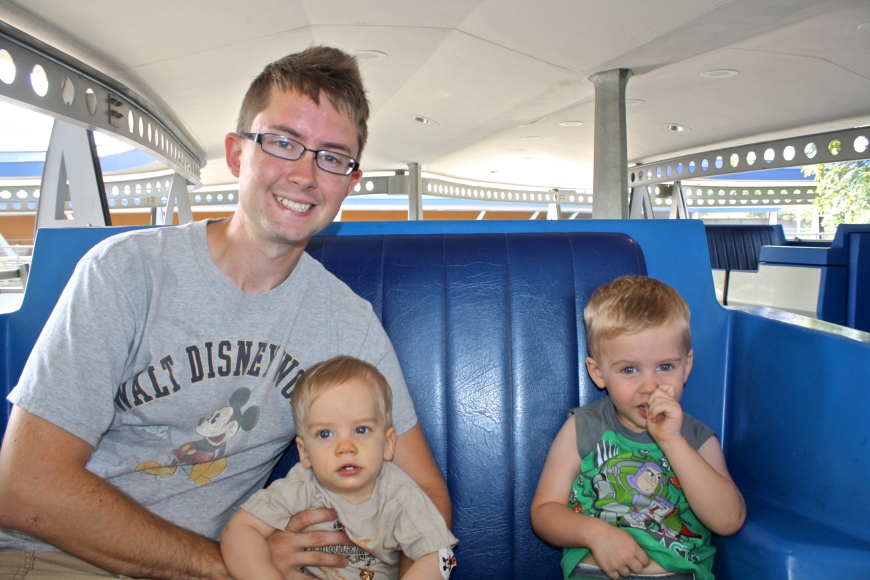 We even had time to watch Dream Along with Mickey again, which Jack was thrilled about. This time, though, instead of breaking out our pre-packed snacks, we got a turkey leg! Whoooo! 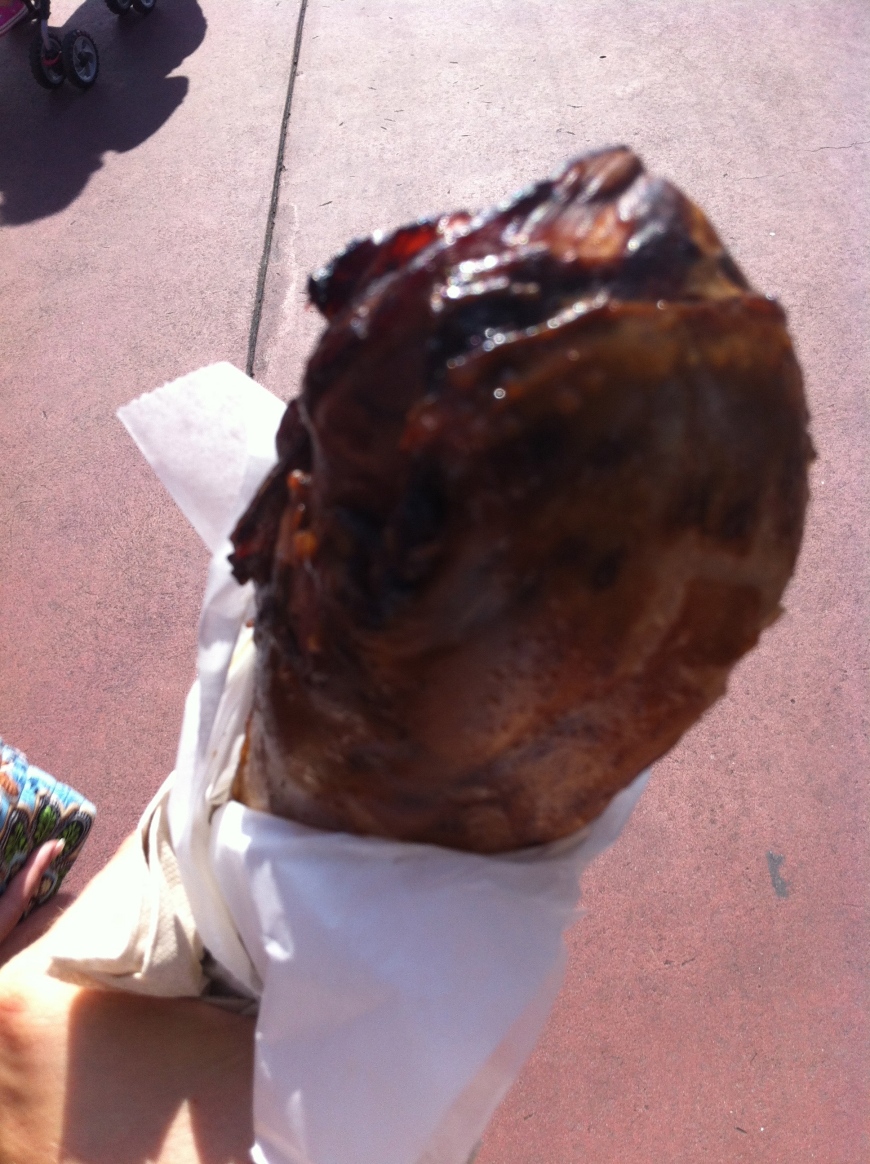 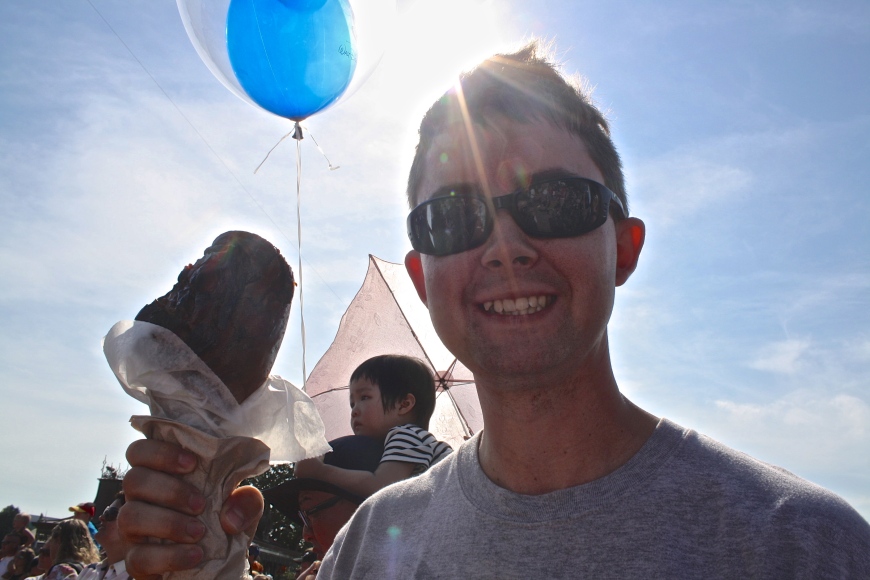 Y’all. We’ve been trying to get a turkey leg for how many years now? Well, we finally broke down and bought one. We usually end up not getting one because we are on the dining plan and the turkey leg doesn’t fall under that unless you use a whole quick-service credit. {When using a quick-service credit to get a turkey leg, you will also get a drink, chips, and a cookie.} It was totally worth it. Totally yummy! And I am the type of girl that is totally picky with her meat. {Like, can I totally say totally again?} I don’t do veins, fat, gristle, skin…so you can see why it would be a big deal for me to say that it was yummy. The only negative thing we had to say about it was that it was piping hot! Which is good, unless you are sitting in direct sunlight watching a show for the second time. It was hot, we were hot, Jack and Cole were happily watching Mickey sing and dance…we were trapped in a hot, sweaty, turkey-flavored mess. At least it tasted good.

After browsing the gift shop and catching the tail-end of the Move It! Shake It! Celebrate It! parade, we headed out for naps.

Incase you were wondering, my folks had decided to spend that morning in Animal Kingdom. They said they had a blast. My dad {being the only thrill-seeker out of their small party} got to walk on Expedition Everest five times in a row using the single rider line!

The boys took a really long nap that day. Tim and I enjoyed our time together out on the balcony. We did a lot of Disney dreamin’ over cups of coffee, and even played Buzz Lightyear Operation, a game Tim had borrowed from the Cub’s Den. 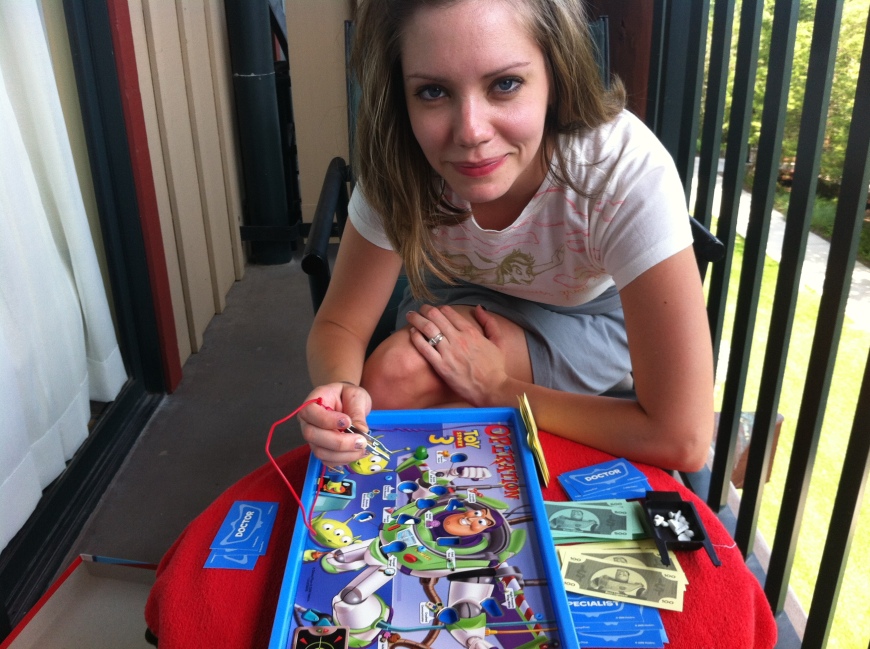 {How’d ya like those terrible pictures Tim took? I have no shame. Oh, and Tim beat me.}

After the kiddos woke up we got dressed for dinner in Downtown Disney. We had a reservation at T-Rex. We had never eaten there before, so I was half-excited/half-nervous about the boys reactions to the restaurant. Before we headed out, we stopped for their “growth chart” pictures by the gift shop totem pole.

I just love that we do this! Look how much Jack had grown since last year!

Finally, we made the trek over to Downtown Disney’s Marketplace and bummed around there a bit before meeting up with my parents outside of T-Rex. 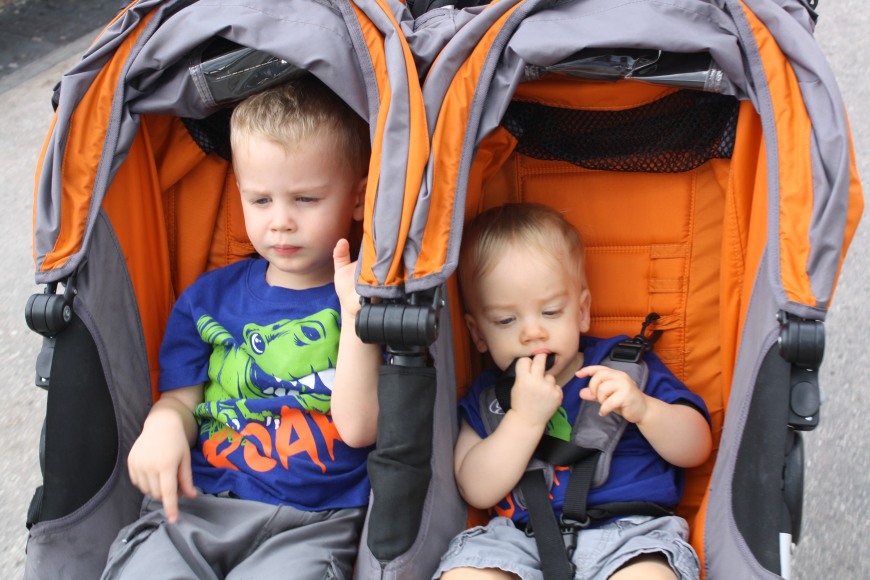 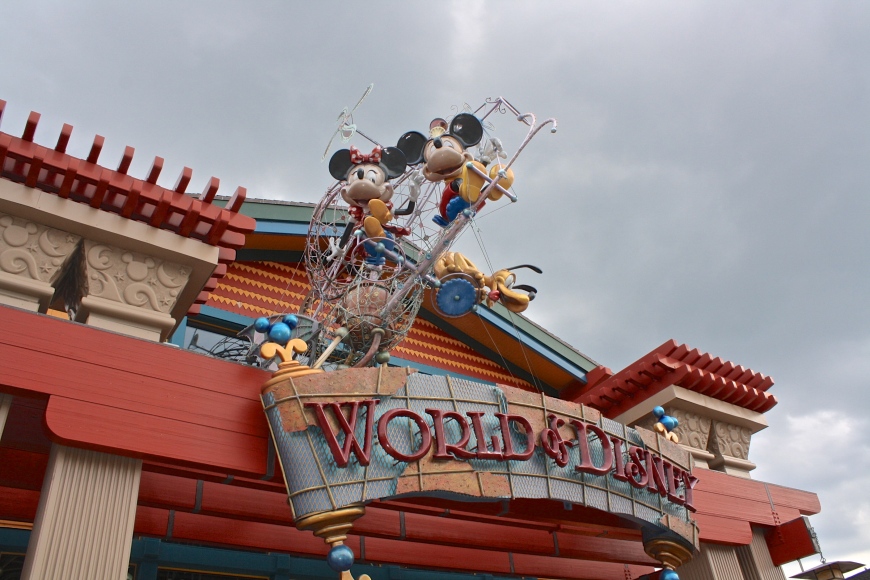 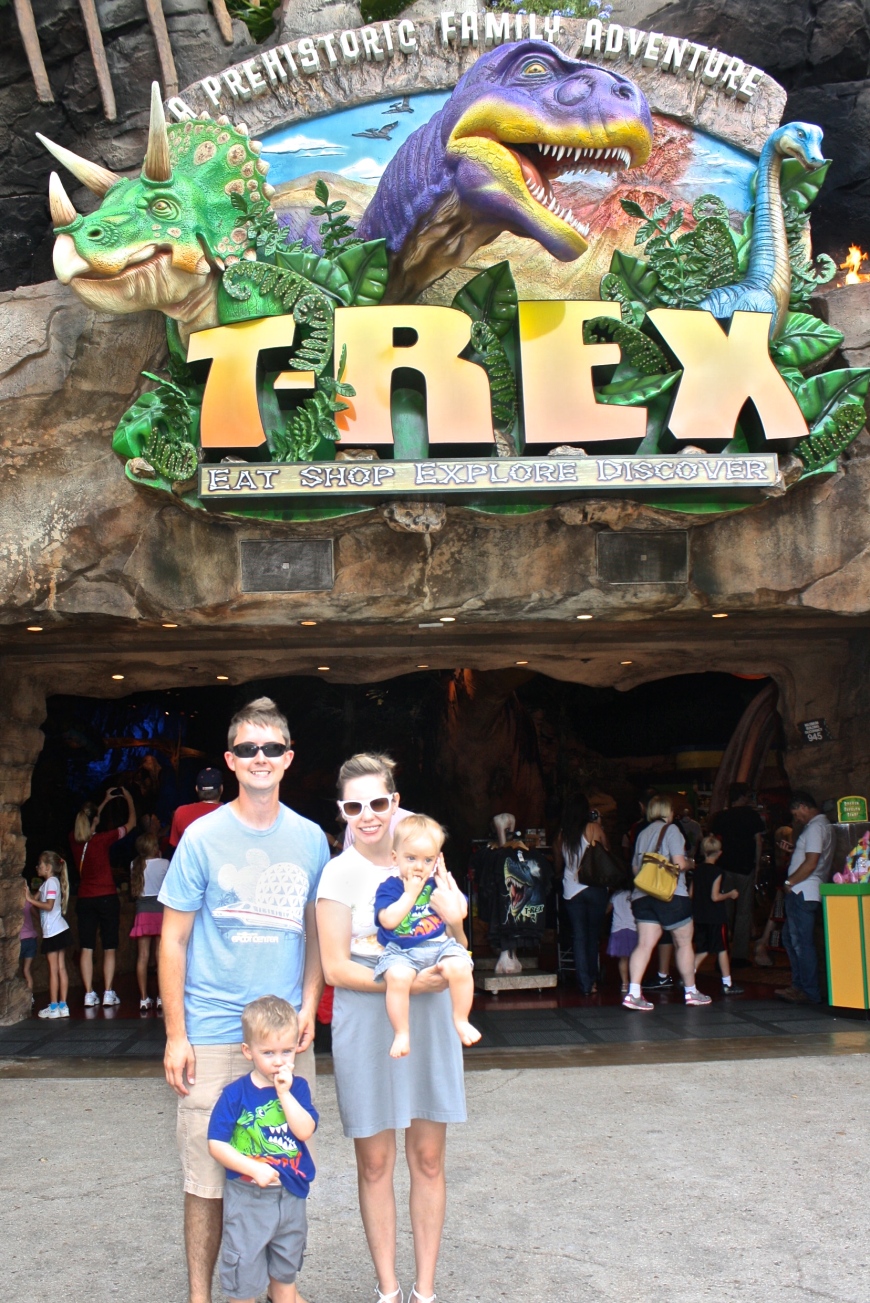 For those of you that don’t know, T-Rex is a dinosaur version of the Rainforest Cafe. There are five different “dining rooms” {they are all connected and you can kind of lose where one ends and the next begins}, and every fifteen to twenty minutes a meteor shower takes place. During the meteor shower, the life-sized dinos come to life by moving, growling, and roaring, lights flash and dim, and the ice-aged room changes colors. Jack seemed okay with the dinosaurs, but he was not a fan of the meteor showers. Every time one would start, we would coach him through it saying, “Ooo! Isn’t this cool? Don’t worry, it’s almost over.” When it was over we would cheer. 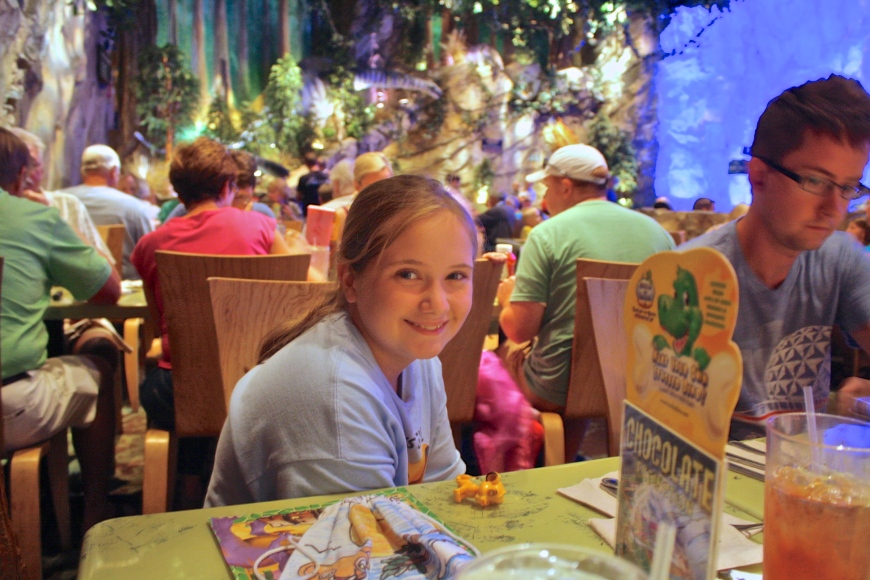 I enjoyed the food, however it is very similar to your average Hard Rock/Planet Hollywood kind of menu. But when traveling with a larger group, this is nice because there is usually something for everybody on the menu. Our waitress was great! She explained the menu and how our dining plan worked in their restaurant thoroughly, and was very attentive to our needs; even when it came to heating a bottle for Cole.

My mom and Tim shared the sampler appetizer {which did count as an entree on the dining plan} and the nachos. My dad got a steak, Hannah ordered a hamburger, and I got a chicken salad sandwich. 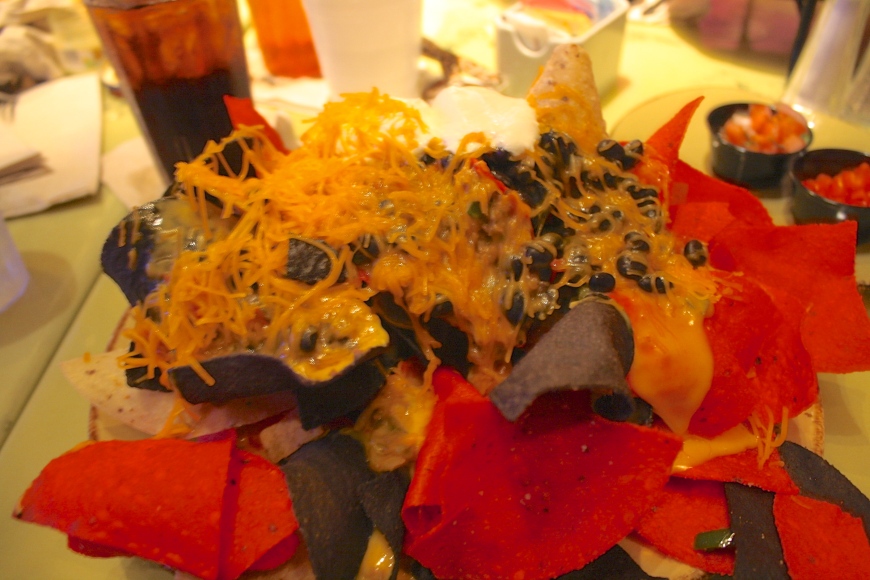 It was a good thing our waitress was so explanatory, because dessert worked a little strange there, too. There were a couple of desserts that counted for one person’s dessert credit on their meal plan, and then a few that counted for two to four people’s credits. For example, the Meteor Bites would have to be shared by two people, and the Chocolate Extinction by four. It felt a little bit like playing Tetris, trying to figure out what everyone wanted, along with making sure it fit within the meal credits. My dad ended up being the one a bit unsatisfied. He wanted the Chocolate Extinction, but Tim and I had already decided to share the Meteor Bites, my mom wanted the Cosmic Key Lime Pie, and my sis wanted plain ol’ ice cream, so he had no one to share it with. I think he may have ended up settling on the Ice Aged Indulgence, but the hit of the table was definitely the Meteor Bites. 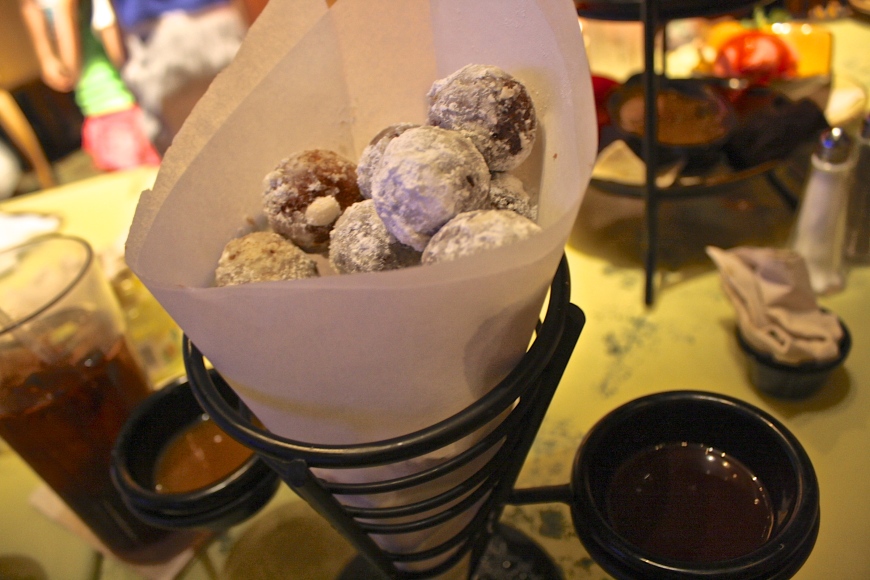 Ohmigoodness, these were sooo good! Imagine warm, soft, fresh vanilla and chocolate Munchkin doughnuts, rolled in powdered sugar with a caramel and chocolate dipping sauce on the side. Oh my watering mouth; I could eat some right now! There were so many of them that the whole table shared. Tim and I decided that we would definitely go back just for those in the future.

After dinner we shopped and strolled for a bit before heading back to the Wilderness Lodge for baths and bed. [Sigh] The next day would be our last full day in WDW {I know! Don’t think about it!}, and we wanted to be sure it was the best day yet!