Ooo! Look at that! Another post that took me days to write to completion! You might want to refresh yourself on the backstory of this trip. All caught up? Okay great, let’s begin.

Well, Thursday rolled around very quickly. With Christmas being booked full of our usual family parties and traditions, we were left with only Wednesday to prepare for our trip. We went last minute shopping to make sure we had the house stocked with diapers and food for the boys, and bottled water, snacks, and the like to take with us on our trip.

We’ve got leaving for WDW down pat. It’s like a well-oiled machine.

Fill up gas tank. Load the car of all luggage, minus the bathroom bag {we do still take the time to brush away our dragon breath in the morning}. Pre-set coffee maker. Set alarm for 4:30am, at the latest.

Tim’s alarm goes off. He jumps out of bed and readies himself. I roll around and moan, but not for as long as usual since we are going to WDW. After Tim finishes up his quick morning routine, I mosey to the bathroom and make myself presentable while he gathers last minute items {phone chargers, pillows, etc.} and pours our mugs of coffee. By the time he’s done, I’m done. And voila! {Wow. When I tell that story I sound like a real slug. And my husband sounds like a superhero. Eh. I guess that’s pretty accurate.}

Usually we have the boys to get up, as well, which we usually do last minute to encourage continued sleeping in the car {just change their diaper and carry them across the house in their jams to the carseat like you are carrying an egg on a spoon}, but this morning was nice because it was just the two of us. We were up and out of there in no time!

We arrived at our destination at about 11:30am. We unloaded the car, changed out of our comfy travel clothes and put on something a little more Date-Day worthy. Tim had Downtown Disney and resort hopping on the agenda for the day.

We started out with resort hopping. Since we are planning on buying in to DVC within the next few months, Animal Kingdom Lodge and Saratoga Springs were on the top of our list to visit because those are the only two DVC resorts we had yet to see. {Clarification: we have been to Animal Kingdom Lodge several times, but had never been over to Kidani Village to see the DVC area.} 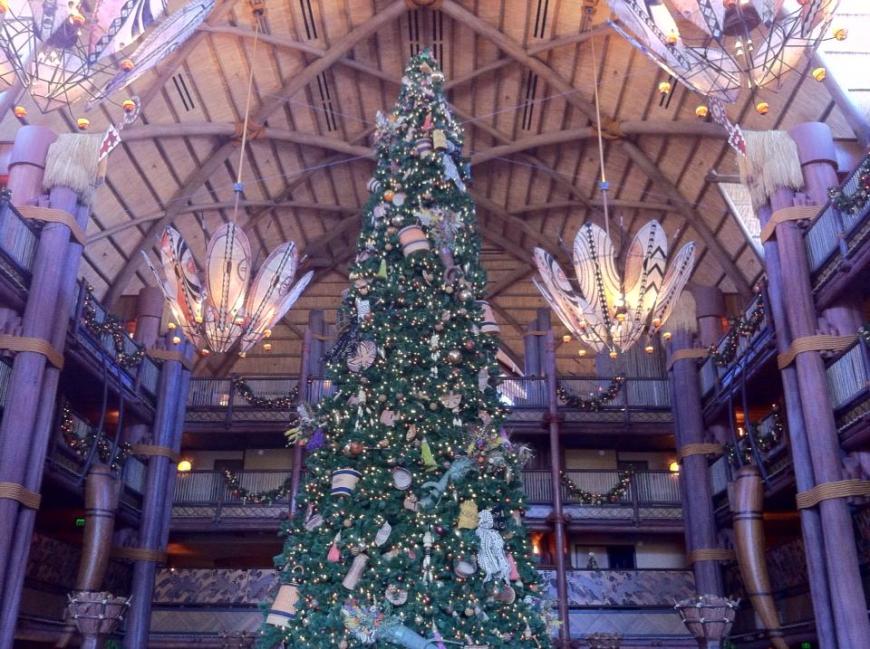 We started out there because we were hungry for lunch and decided a stop by The Mara at the Jambo House for a yummy bite to eat. We ordered the half chicken dinner with cous cous and vegetable stew to share. The veggie stew was sooo yummy. I could have just eaten a big bowl of that over cous cous and been perfectly happy. 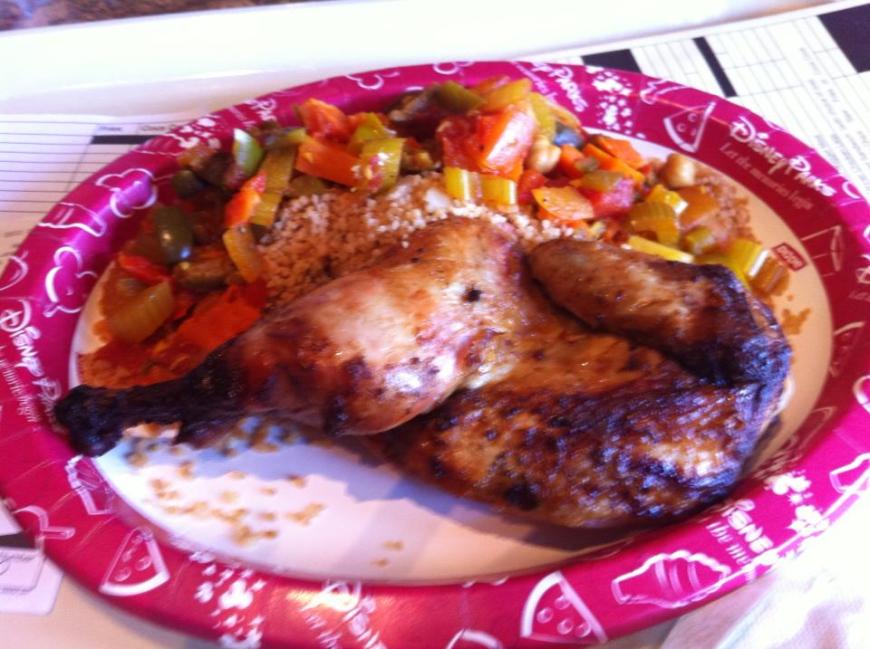 After eating, we headed over to Kidani Village to look around. We loved it. It was gorgeous; a little mini-Jambo House, with great views of the Savannah. We also browsed the gift shop {I picked up some trading pins for my little sister’s 13th birthday}, and stepped inside Sanaa for a sniff and peek. Consensus: smelled and looked good! 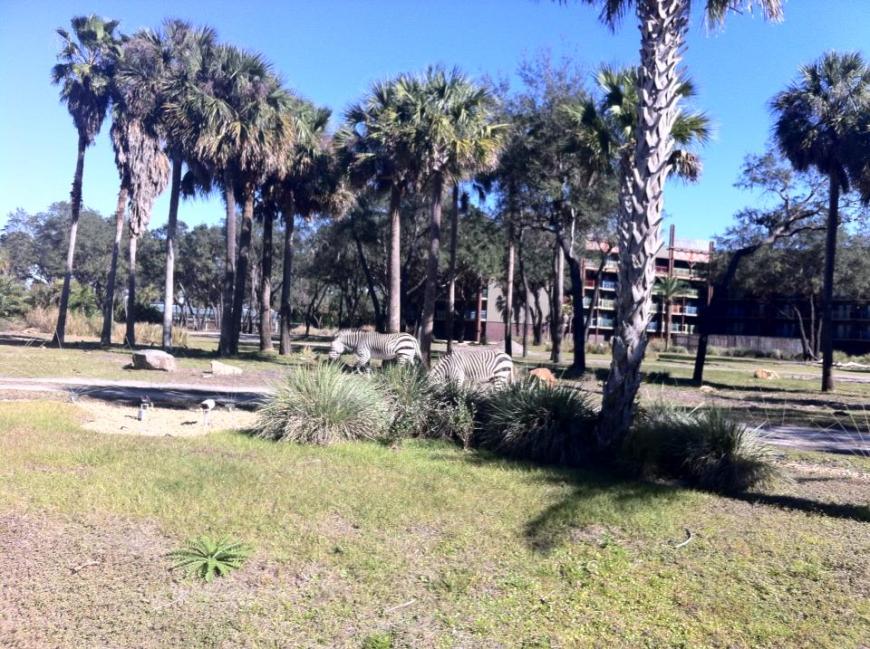 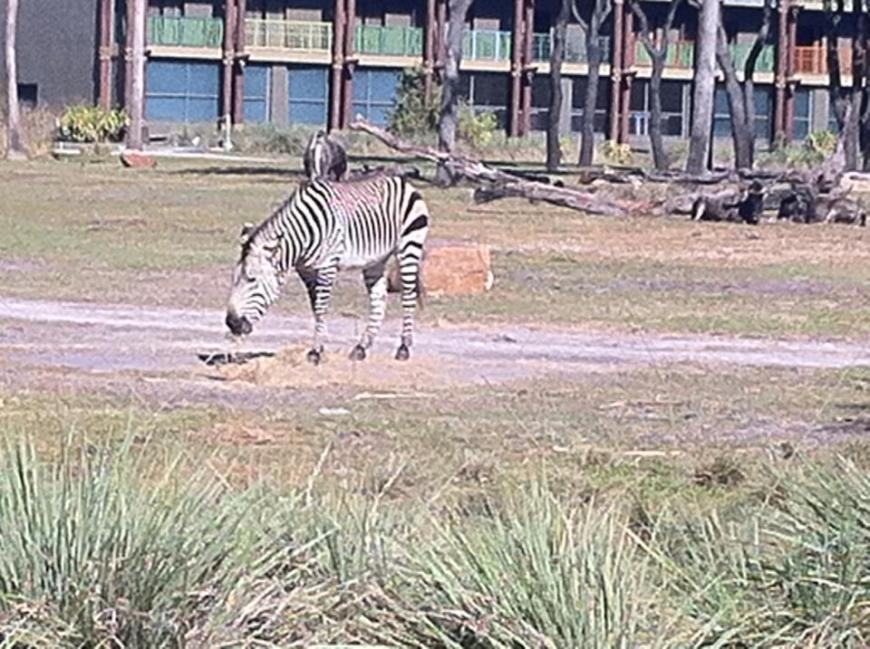 We really enjoyed what little time we spent at Kidani Village, but we came to the conclusion that although the atmosphere is top notch and the boys would love it, we think the Animal Kingdom Lodge is going to remain a fun place to visit instead of a place to stay. Since staying at Bay Lake Tower and Wilderness Lodge, we have become the biggest of snobs when it comes to location. At this age and stage of our lives, Magic Kingdom is just the place we want to be, so staying close and at a resort that provides better transportation than lugging a double stroller and two kids two and under on to a lengthy bus ride is the way we want to go. So sorry, AKL. We love your restaurants and sweeping Savannah views, but as far the Elrods go, that’s probably the deepest we’ll venture into the South African wildlife.

Next we hit up the Art of Animation. Although, we know we will most likely never stay there either, we have been really excited to just take a look around. It was so great! Colorful, bright, excellently themed, and perfect for families with little ones that don’t fit the standard family-o-four room. Tim and I had fun just walking around, so I can’t imagine how excited Jack and Cole would be there. The food court was also pretty cool, and had many options that the other value resorts don’t offer. We were pretty tempted by a few items, but decided to save our snacketite for later. 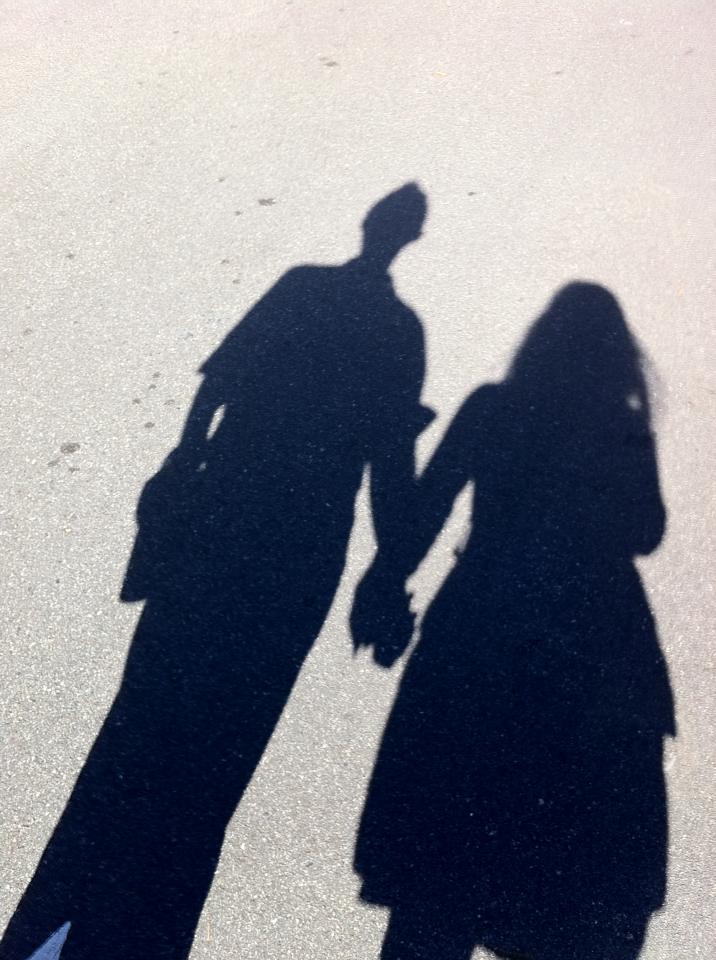 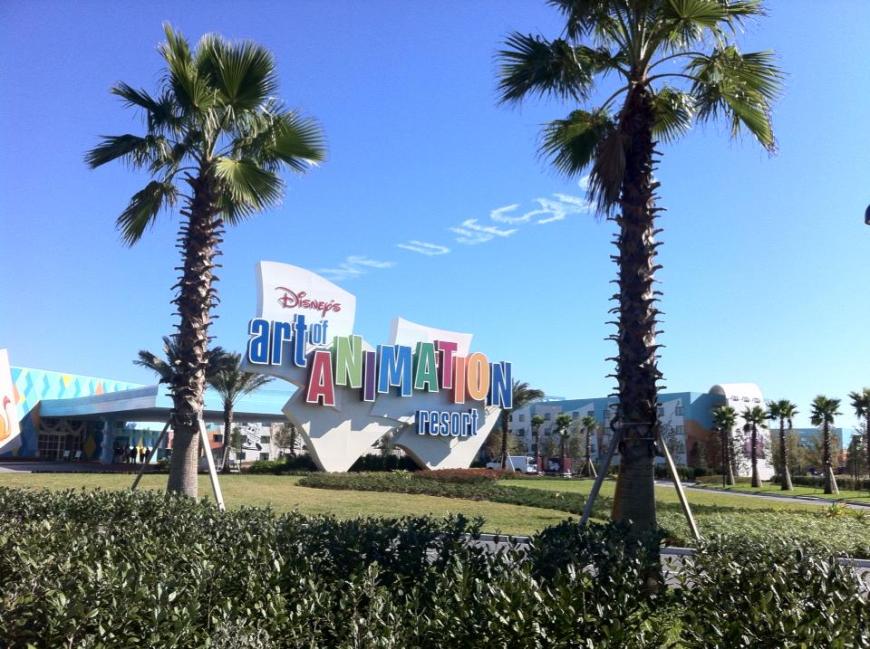 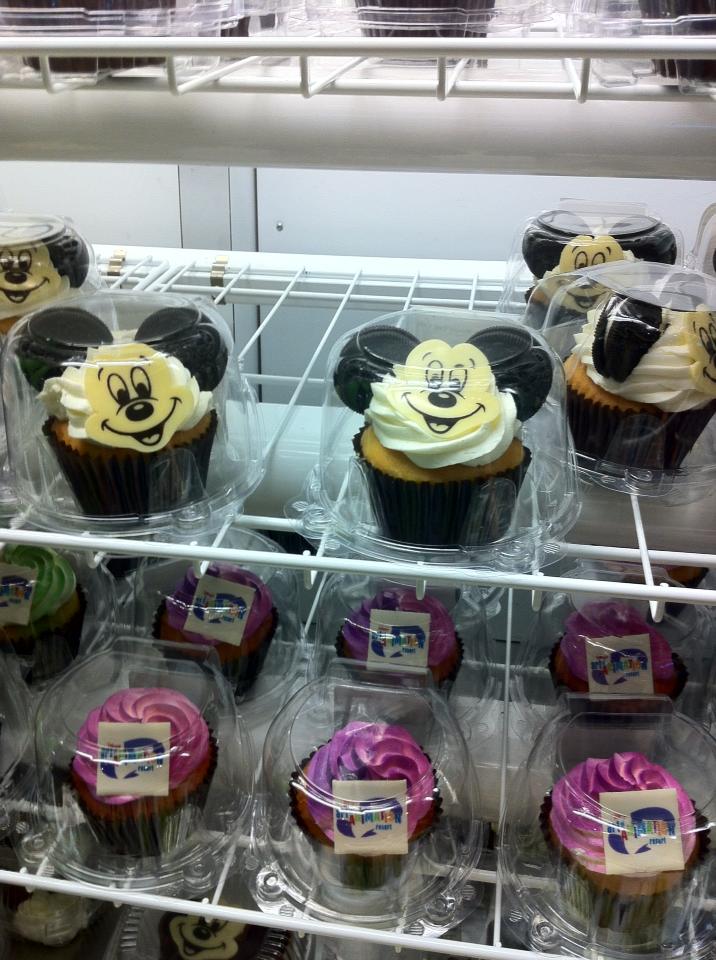 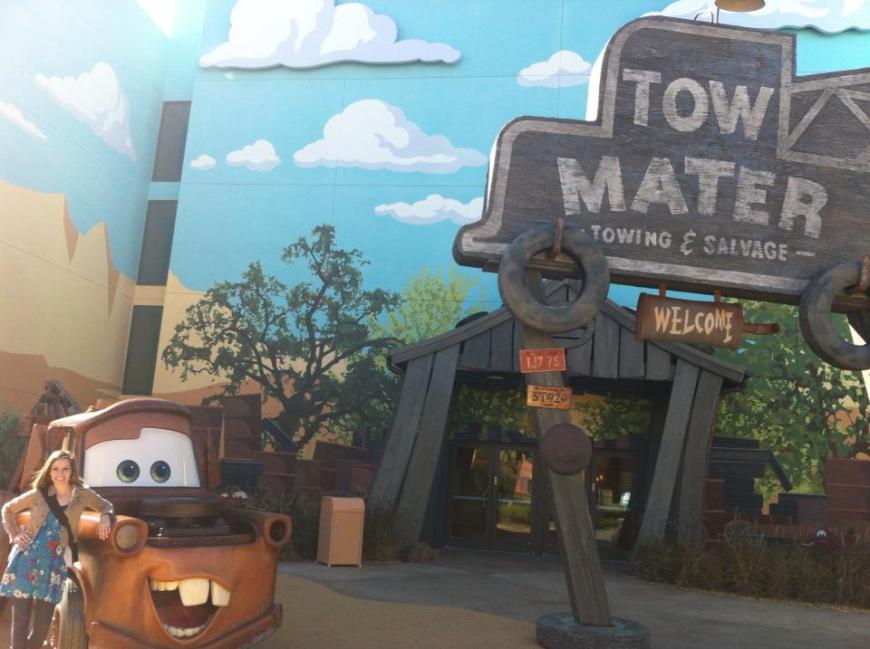 Later turned out to be the next stop, which was Saratoga Springs. We walked through the main lobby, made the quick walk-through the gift shop/quick service stop {the set up there was a bit confusing to us…}, admired a mug we were tempted to buy, and grabbed an order of their house-made potato chips. Elrod WDW Tip: Those house-made chips {that you can get at several resorts and locations} taste super yummy dipped in ranch dressing or BBQ sauce. Just sayin’. 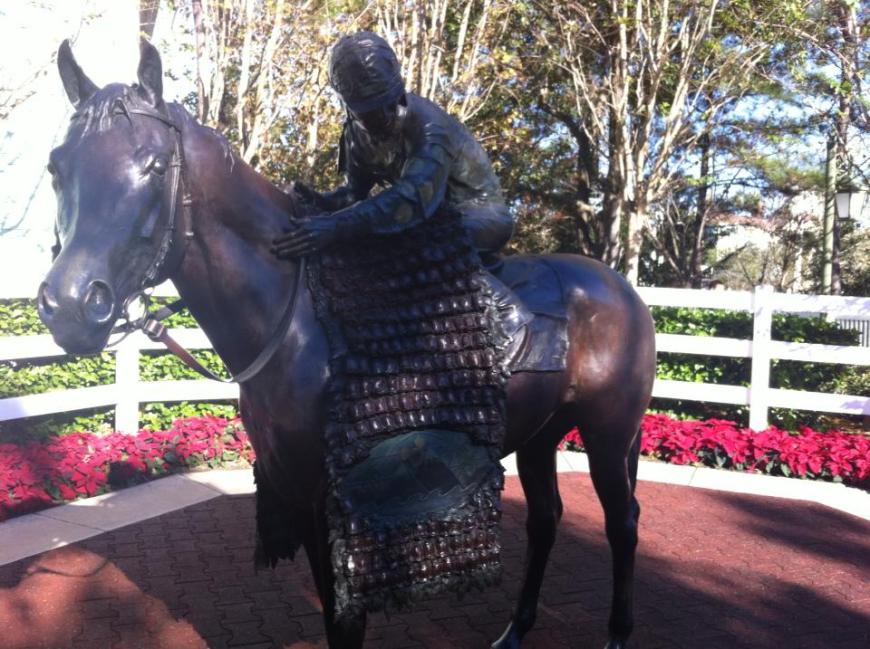 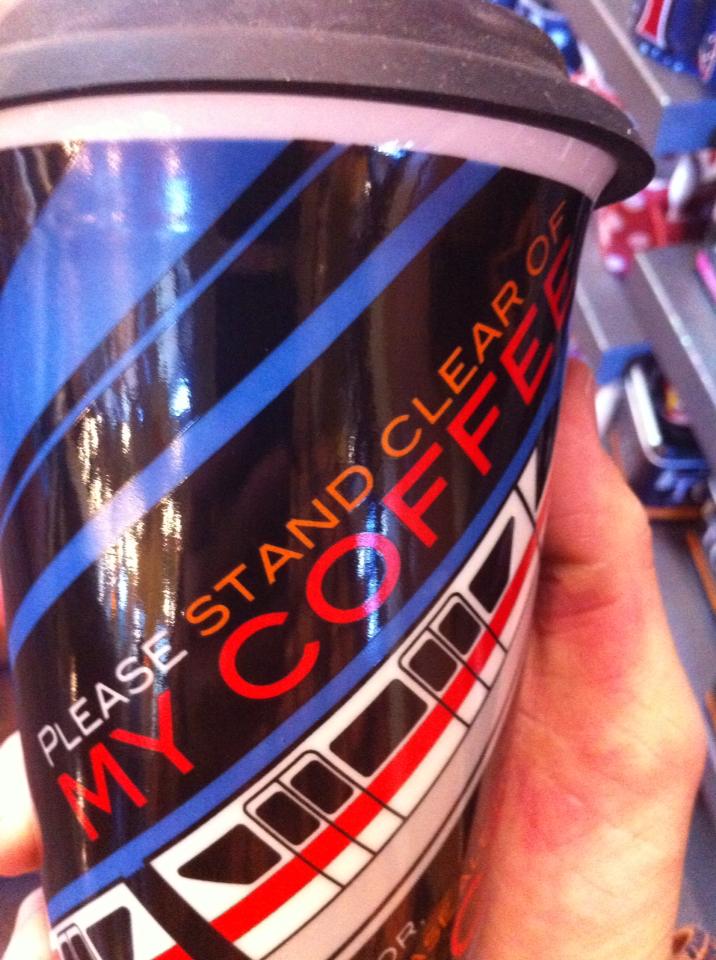 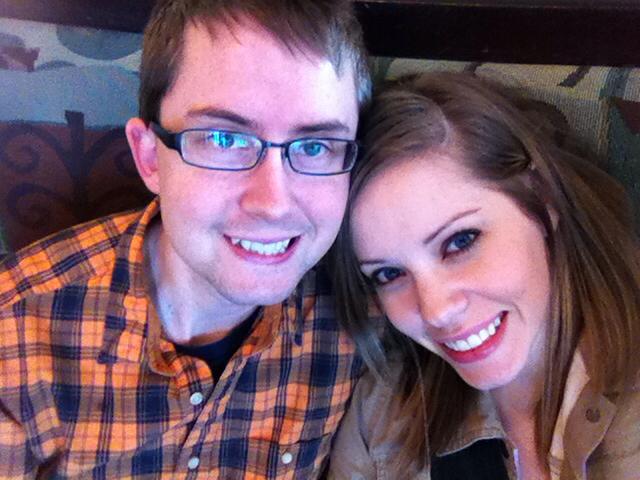 Incase you haven’t noticed the poor quality of these pictures yet, the reason why they look so pixely is because we decided that on this trip we were going to have fun focusing on us. Each other. So we left the fancy-schmancy camera home and took what we felt compelled to capture via our crack-screened iPhone 4’s.

We had a nice time bumming around Saratoga Springs. We sat in the quick-service area for a while, dreaming and talking about DVC and missing our boys but not missing our boys all at the same time. We also at that time came to the conclusion that we felt similar feelings toward Saratoga Springs as we did toward AKL. Nice, but not our “home”. We definitely felt the lead to buy in at the Wilderness Lodge and make the “seven month switch” to Bay Lake Tower some years, if it’s available. DVC insiders, you know what we mean.

That being decided, we stood up, dusted the last few chip crumbs from our laps, and headed to Downtown Disney, feeling better bonded and more lovey-dovey than we had in a while. Dreaming with your spouse will do that to you. We are definitely advocates of spousal future dreaming.

Due to the fact that it was two days after Christmas, Downtown Disney was crowded! We had a little bit of trouble finding parking, but eventually found a place near Planet Hollywood. It was pretty tough getting around, but we were in heaven simply because we didn’t have a double stroller to, “Excuse me, excuse meeee..” through. We kept commenting to each other how we didn’t even care it was crowded because we didn’t have the boys to worry about. We were like two little mice, slipping in and out of flocks of strangers. We know where everything is and even short cuts here and there, so were unaffected by how many people were there.

We went in shops, got a mocha and biscotti from Ghirardelli, and snooped around the brand-spanking-new Splitsville. And let me just say, for those of you who rolled your eyes at the thought of a bowling alley in WDW, I say “Bah humbug!” That place was amazing! We are totally looking forward to knocking down some pins there in the near future. 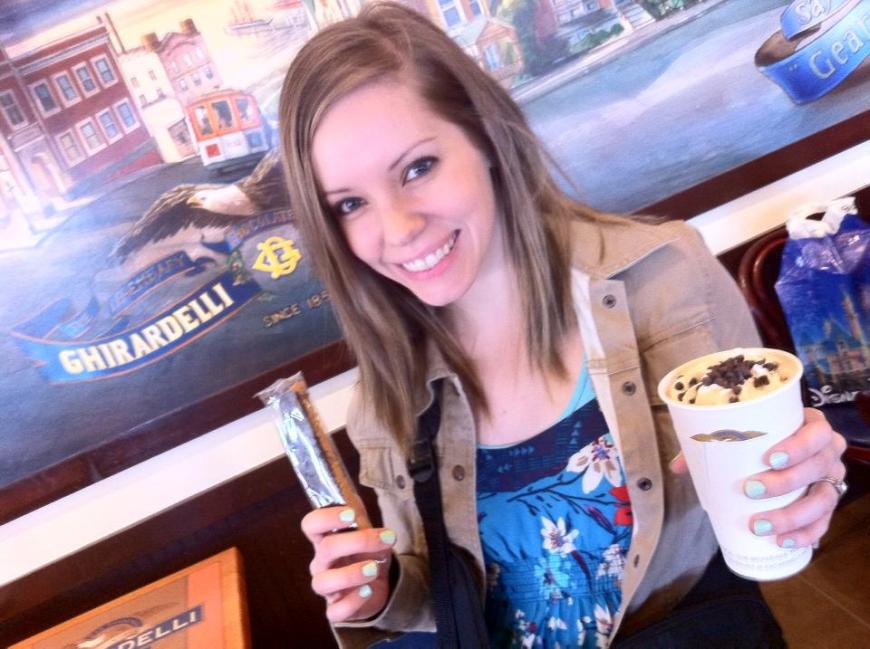 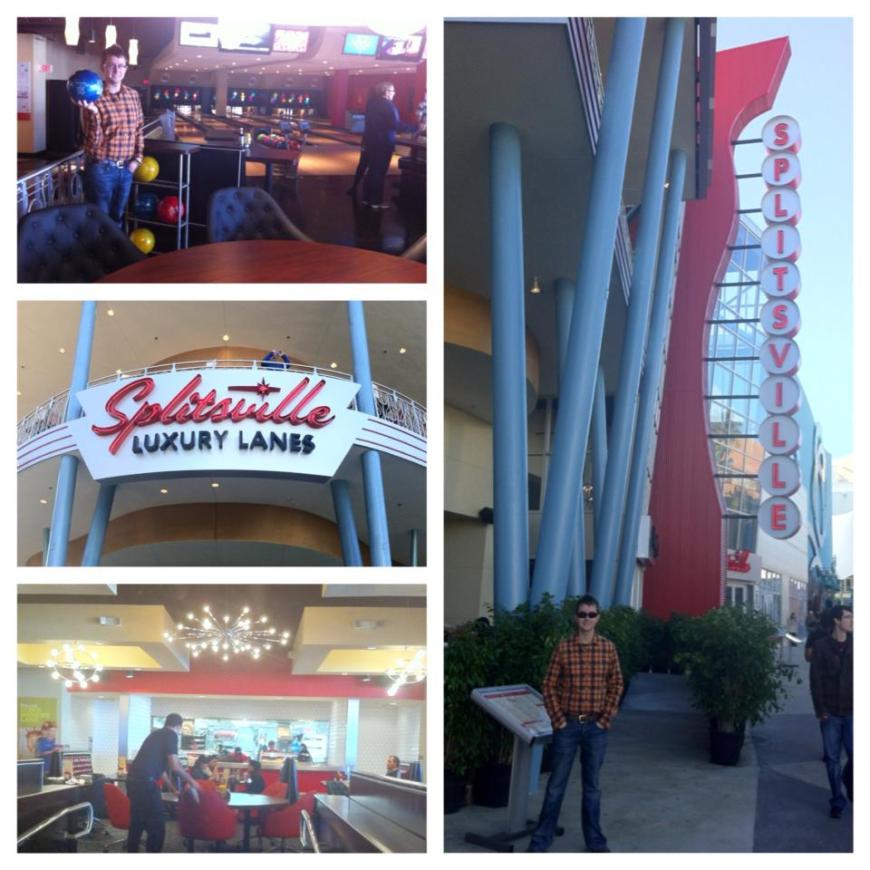 After a while wandering around Downtown Disney, we were beat. Although adrenaline goes a long way, waking up at 4:30am can still take it’s toll on a body. We headed back to our place of stay, the same we stayed at on our Christmas trip in 2010, owned by an amazing and generous family we are blessed to know. Get this guys. We. took. a. nap!

Whaaa? I know. Two adults that have two toddlers got to take a nap. And it was glorious. One of those naps where you sleep so hard you don’t move so you wake up with lines imprinted on your face and arms. Yeah. So good.

We woke up, stretched, and surveyed the time. Late. Way past our dinnertime. Like 6:00! Woah!

Hey. We eat on toddler time. Dinner occurs in our house between 4:30 and 5:00 everyday. The fact that we wouldn’t eat dinner until 7:00ish made us feel even more footloose and fancy-free. We were walking on the wild side, I tell ya!

We chose Chevy’s. We had eaten there a couple years back with some of our best friends on a Braves Spring Training trip, and Tim had been salivating over the potential of eating there again ever since. Since we weren’t staying on property, it was an excellent opportunity. 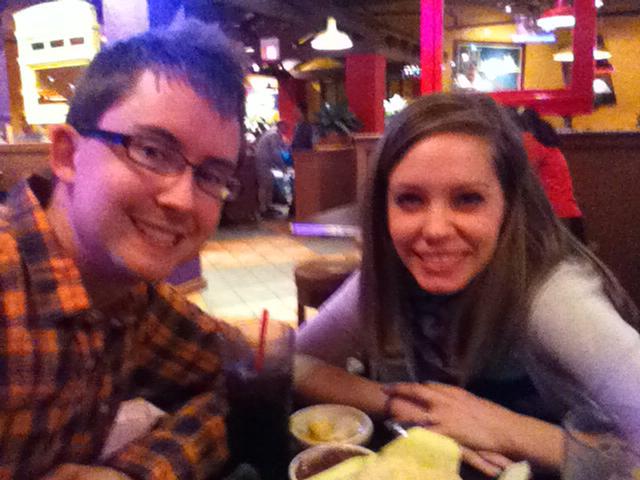 Once we’d finished our tacos and licked the cheese dip bowl clean, we did what all old farts do; headed back to the town home to turn in early. Ahhhh….Tim and I are going to make the best old people. And I can’t wait. But to our credit, we did want to get in bed on time because the next day was our one and only day in Magic Kingdom and we wanted to give it all we had.

Eeee! Just saying, “day in Magic Kingdom” gets me giddy. A sure sign of a Disney maniac, yes?