I did it! I ran Disney! Four days later, my muscles are less sore, my left IT band is giving me zero problems, and my PDD {Post Disney Depression} is slowly ebbing away.

Running the Princess Half Marathon was a blast! It was something on my bucket list, and now that I’ve checked it off, I think I want to add more runDisney races to it. Let me remind you that prior to my signing up for this race, I would have never considered myself a “runner”. However, throughout the training, I actually found myself enjoying to run! Even though my training was foiled a good bit by my pesky IT band, I made it to the finish line and could not have felt more proud. In hindsight, I learned a lot during my first Disney half marathon that even the best of training could not have prepared me for, and I wanted to share that knowledge with you. So, here are my Top Ten Tips for First-Timers:

10. Sign up quickly! Really. Be waiting at your computer five minutes before registration begins. These races fill up quickly. I had to run my first ever Princess Half Marathon alone because girls that were wanting to run with me couldn’t get spots just five or six hours later! I hear that the races in Disneyland fill up even faster than that, due to lower capacity, s make up your mind whether you want to do it before the registration date and be ready when registration opens. 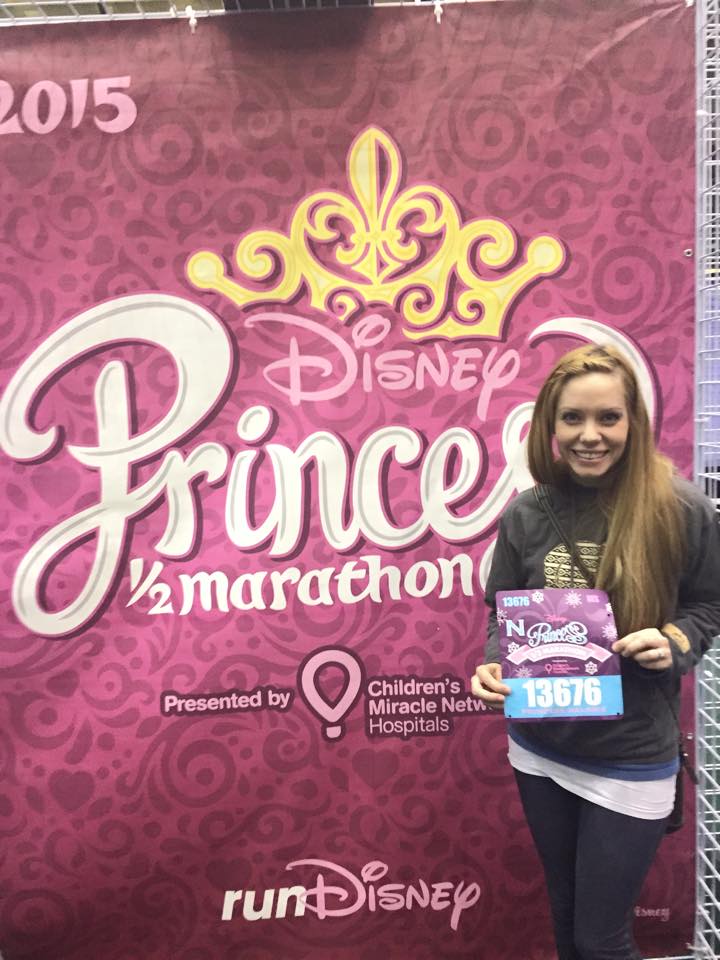 9. Dress up. It’s your first time, you need to dress up. Make it fun! Make it cute! Pinterest-board the heck out of those running costumes and whether you make one or order one, be sure to run in it before your race so you know what areas will tend to chaff and whether it’s actually going to be comfortable enough to wear for 13.1 miles.

8. Train for a 12-13 minute mile. In Disney races, you have to keep a 16 minute per mile pace. They have pacers at the back of the crowd on bikes with flags and walking with balloons. If you fall behind, you could be picked up by a bus at any time. You do not pass Go, you do not collect $200, you do. not. finish. the. race. Training for a 12-13 minute pace will give you a little wiggle room for standing in line for a character meet’n greet, porta potty, or, in my case, to get through the castle. {Ugh! Anna and Elsa were standing above the entrance and runners were under them, taking pictures, so you literally couldn’t get through to continue on the course. It probably took me a good two to three minutes to walk from the back of the castle through to the front. Talk about a pace-killer. Frozen fail.} Jeff Galloway has great advice for first-time runners and has a whole run/walk/run interval chart of whatever pace you want to keep.

6. Wear a race belt. We have some amazing friends that let us borrow theirs. It had a zipper pocket with a mesh pocket on front and a water bottle attachment. During the race, I saw some more elaborate and some less elaborate. Just get what works for you. I stocked mine with chapstick, tissues, a Luna bar {DO NOT eat the gels they give out at mile 9 unless you have had them before! Bring your own energy boost that your body knows!}, and a couple of ibuprofen that I popped around mile 12. I filled up the water bottle and kept my phone in the zipper pocket when I wasn’t taking pictures. 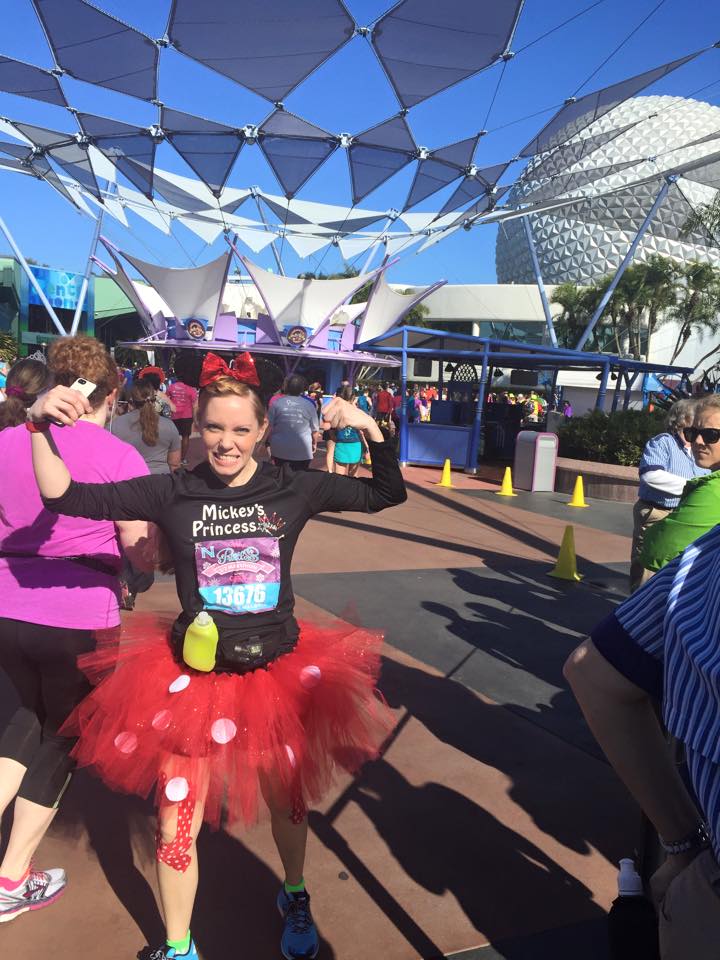 5. Catch the race-day transportation early and get to the front of your corral! Or if you are driving {which I don’t recommend} get there early. The buses were running a bit behind on Tim’s race-day, so I made sure to be out at the bus stop way before I had to. Luckily, there was a bus waiting on me when I arrived. Unless you are just dying for a picture with the character meet’n greets in the warm-up area, go ahead and get to your corral when the bus drops you off. I had heard it was a lengthy walk to the corrals from the drop-off point, but was really was. It was a good 15-20 minute walk. I got there early and was right next to the mesh at the front of the corral. Being at the front of your corral gives you extra time in keeping that 16 minute pace, which is nice to have if you have a knee you’re not so sure about, like me.

4. Think through the porta potty situation and stop at real bathrooms! When I say think through the porta potty situation, that mainly means, make sure your costume is porta potty friendly. Can you pull your skirt easily up or down? If you have a fluffy tutu like mine, I suggest removing it and setting it on the ground outside of the porta potty. After just a few uses, especially in those early morning, dark hours, there is really not a safe place to touch inside of those things. I took mine off and left it outside and it never got swiped. If you feel really uncomfortable about leaving it out of sight, ask someone around you to keep an eye on it. It will be fine. ALSO! Those tissues in your belt can come in handy for more than one reason, if you know what I mean. Thousands of nervous tummies use up a lot of toilet paper, and sometimes you can walk in to a soggy situation {if you’re catching my smelly drift}. Having something of your own to use as backup is a great idea. There were a couple times {inside of the parks and passing the transportation center} that we passed real bathrooms. Stalls and sinks with real soap have never looked so glorious. Snatch up those opportunities, if you’ve gotta go.

3. Utilize the medic tents and water stations. Throughout the race, there will be water and Powerade tables. Get something every time. I heard it was best to rotate between water and Powerade, so that’s what I did. Towards the end of the race, I would sometimes take both. Thanks to my previous day of hydrating, I actually never felt thirsty, but I knew that my body needed it, so I made sure to make good on every opportunity. There are several medic tents along the way, too. If you are feeling even a little soreness in your muscles, grab a pump of Biofreeze and slap it on. I bathed my knees in Biofreeze at every medic tent along the way. It didn’t take but a few seconds to jog by, get a pump {often they had someone holding the bottle pumping it into your hand for you}, and step to the side, slather it on, and get back to jogging. I credit the KT tape and Biofreeze for getting my bum knee through the race without further injury. They also hand out vaseline for any chaffing you’re having. Don’t be ashamed. I saw people with hands down pants, inside of bras, and rubbing nipples…Hey! No judgement here! Chaffing is no fun, so you take care of whatever you need to take care of. If your shoes are rubbing a sore on your feet or heels, or God forbid, you twist your ankle or blow out your knee, they’re there for that, too.

2. Don’t expect a PR. Even if you have done half marathons in the past and feel good about your pacing, don’t expect to use a Disney race as a chance to set a new PR unless you’ve submitted previous race times and can get placed in the first few corrals. There were many times when I literally couldn’t run because the path was too blocked by walkers {not the dead kind} or slower-paced joggers. There were thousands of runners, and sometimes navigating around big walking groups could be tricky during my run intervals. That’s just the nature of a Disney race, and it is more about having fun than achieving a new personal best. I actually feel sad for those corral A runners that trucked on through without taking in Main Street or stopping to get a picture of six Disney princes all in one shot. RunDisney is just as much about making memories as it is meeting personal records.

1. START SLOW! I actually got to meet Jeff Galloway and this was the advice he gave me before my race. I took it to heart and thought I started slow, but if I could do it again, I’d start even slower. The way the Princess Half is set up, you start in the EPCOT parking lot, run through Magic Kingdom around the 5-6 mile mark, then back down the highway miles 7-12 to run your last mile inside of EPCOT. Because my training couldn’t progress like I would have wanted, due to my IT band, I wasn’t able to maintain my run 4 min/walk 1 min pace I wanted to keep. Although I ran at least some portion of most miles, I completely walked miles 9 and 10. Knowing now that I would need that walking time for my knee to rest, I would have walked through Magic Kingdom, taking in the sights and excitement of being there, and saved the energy and knee-power to truck through those desolate highway miles. Even if you don’t have a bum knee, I would suggest saving some energy to give to miles 7-12, because those are the least entertaining, and looking at the seemingly endless highway stretching before you can be a downer. Know your course. Anticipate the miles that are going to be tough for you and plan accordingly.

Through bum knee, desolate highway miles, and crowded race courses, running the Disney Princess Half Marathon was one of the most fun and rewarding things I have ever done. I can now say, “I did it!” And you know what? I can’t wait to do it again. Who’s with me?! 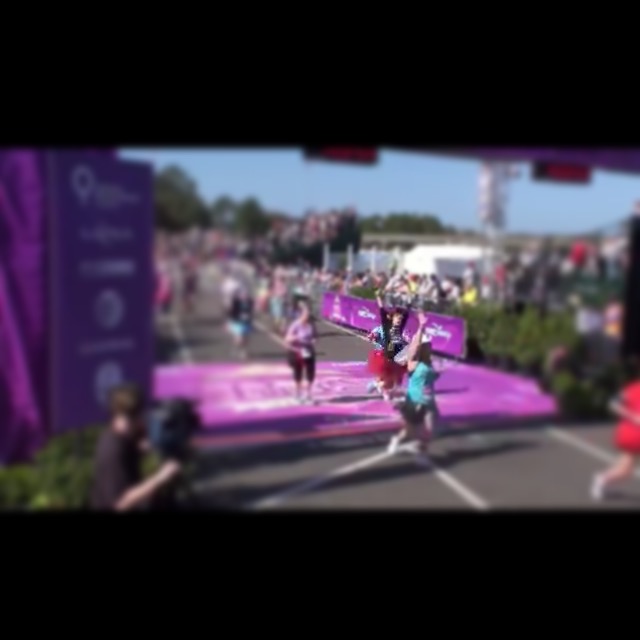 4 thoughts on “My Princess Half Marathon: Top Ten Tips for First-Timers”