[Note to self: Don’t specify a date of when your next blog post will be going up, unless it is already written. Bypass specificity by using terms such as soon, later, or presently.]

Hi! It wasn’t until late-ish Tuesday night that I realized I hadn’t made good on my promise to post about day two of our most recent Disney trip on Wednesday. I was holding out for a vlog session with the Birthday Boy, but I am now glad I wasn’t holding my breath lest I be dead! So here I am, very later-ish on Tuesday night, tapping away on a keyboard. Give me lots of grace on this one, folks. I tend to get even more wordy and brave late at night. Us creative people always teeter on the brink of genius and insanity at such hours.

Picking up where we put down, Tim and I woke up quite early on the second {and last!} day of our trip. Magic Kingdom opened at 9:00 and we wanted to be there for rope drop {see Speak the Lingo + The Slink’n Slide from Making the Most of Magic Kingdom with Young Kids for more}. We were up and at ’em by 7:00. We, once again, checked our bag with the concierge since we would be leaving for the airport later that afternoon, and headed down to the BoardWalk Bakery for breakfast. Tim got an iced coffee and I got a hot coffee and Mickey-shaped chocolate chip muffin…because I mean, DISNEY WORLD! 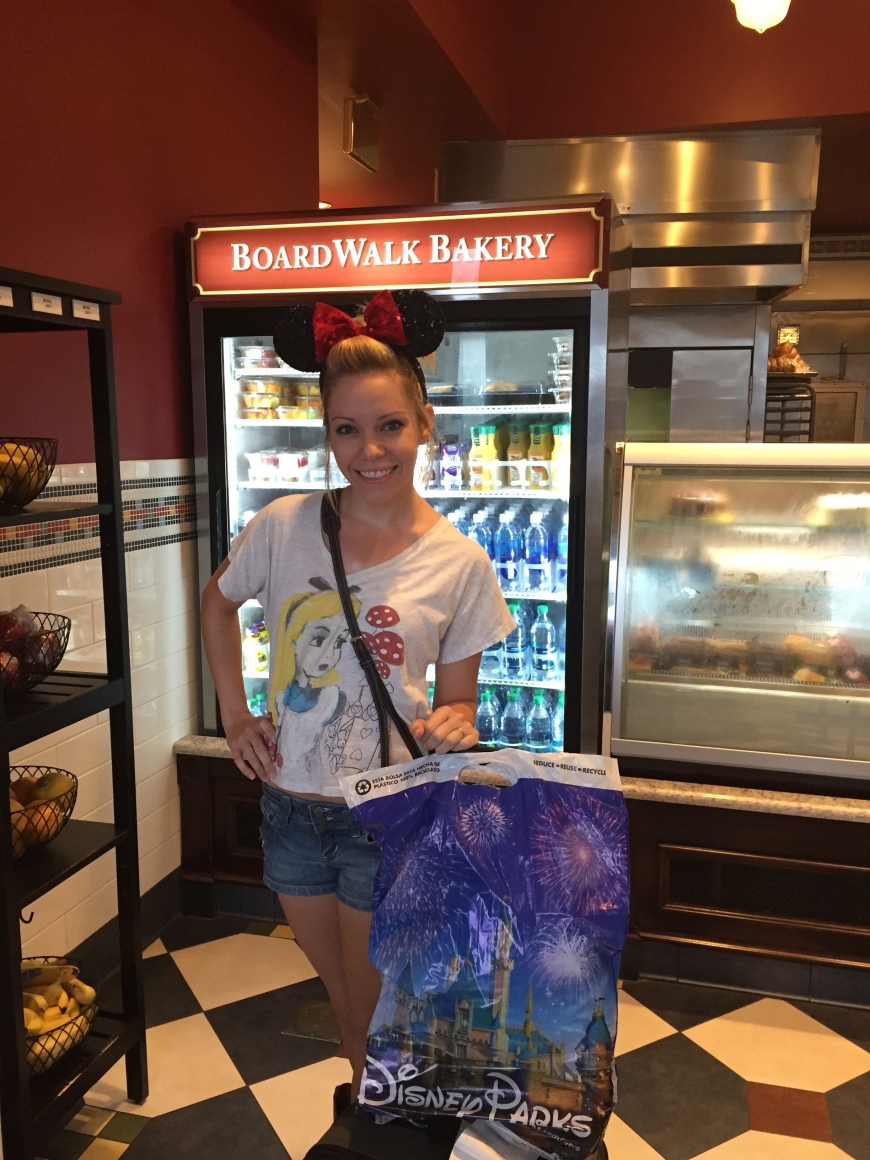 We sat out on the BoardWalk overlooking the lake and Beach and Yacht Club to enjoy our caffeine for a moment. The day was overcast, which was nice, but the threat of rain made us a little nervous. My breakfast was tasty, but Tim’s coffee was terrible. It was some pre-mixed iced coffee junk and was way too sweet for us coffee snobs. After tossing that glycemic nightmare in the garbage, I was forced to share my warm addiction as we headed toward the bus stop to hitch a ride to Magic Kingdom.

Here I will pause for a second to talk about our feelings towards the BoardWalk, considering this was our first experience staying there. Would we stay there again? Absolutely. The proximity to Epcot was too spectacular to say otherwise. The room was meh…we didn’t even take pictures of it, so that should say something. The tile was dated, the counters were laminate; it wasn’t bad, but it wasn’t anything to brag about either. We have seen pictures of a recently updated two bedroom there, however, and it was gorgeous. If our studio had looked like that, we would have had a photoshoot in the room; hair and makeup and prom dresses, you name it. Fingers crossed that it’s in the plans to update all of the rooms like that soon.

The grounds and lobby of the resort were very nice and, of course, the BoardWalk itself is amazing. Our one hang-up is that it just isn’t convenient. Granted, we are admittedly spoiled in the convenience department, staying mostly at Bay Lake Tower and the Wilderness Lodge. Both are smaller, more compact DVC areas with covered walkways to both transportation and quick service restaurants. The BoardWalk is another story. I know that they are wanting to maintain the charm and feel of Atlantic City, but when you want to get a drink for your RapidFill mug, you have to walk all the way down to the BoardWalk Bakery, which isn’t even on one of the convenient corners of the lobby courtyard. The bakery is in the opposite direction of bus transportation and it is a mostly uncovered walk, so if it’s raining you better have your poncho! The resort is pretty spread out, so it’s a fair amount of walking, but this is neither here nor there to most. Once again, we are just spoiled.

The first step in recovery is admitting you have a problem. Or is it having the desire to want to recover? Because if that’s the case, then there’s no hope for us…

Overall, on a scale of 1-10, we’d give it a We’d-Rather-Stay-At-Bay-Lake-Or-Wilderness-Lodge-But-Its-A-GREAT-Option-If-Your-Trip-Is-Going-To-Include-A-Lot-Of-Time-In-Epcot. No wonder the rooms are impossible to get during the Food & Wine and Flower & Garden!

Moving on, we arrived at Magic Kingdom with about thirty minutes to spare. We slowly wiggled our way up to the right-hand gate and ignored the Slink’n Slide since our kids weren’t with us. As gates opened, we stayed in step with Cast Members set to take us to Seven Dwarfs Mine Train. 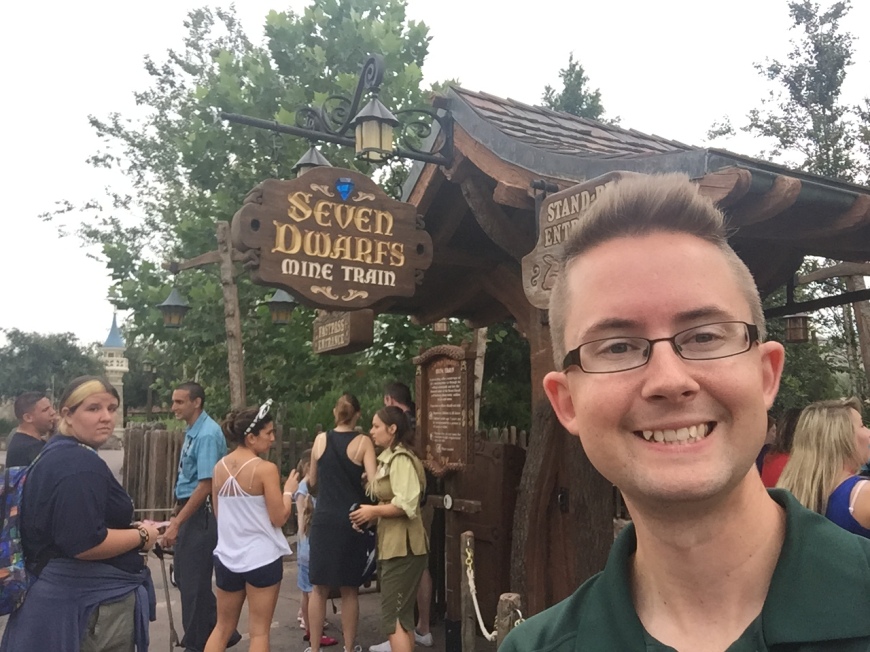 We quietly mocked those pushing and shoving like the Armageddon was quickly approaching, and made it towards the front of the line and quickly got seated on the back-end of the train. The last few cars are the best on the Seven Dwarfs Mine Train! It’s almost a completely difference experience than the first few cars. Once we passed the cackling, haggard Evil Queen with her poisoned apple, we exited and moved on to other Fantasyland attractions. If we’ve said it once, we’ve said it a million times: Even during the busy times, if you get there at park open, you can get so much done! Seven Dwarfs Mine Train, Anna and Elsa, and Space Mountain pull all of the crowds away, enabling you to do so much with very little wait time for the good first hour to even two hours, sometimes! 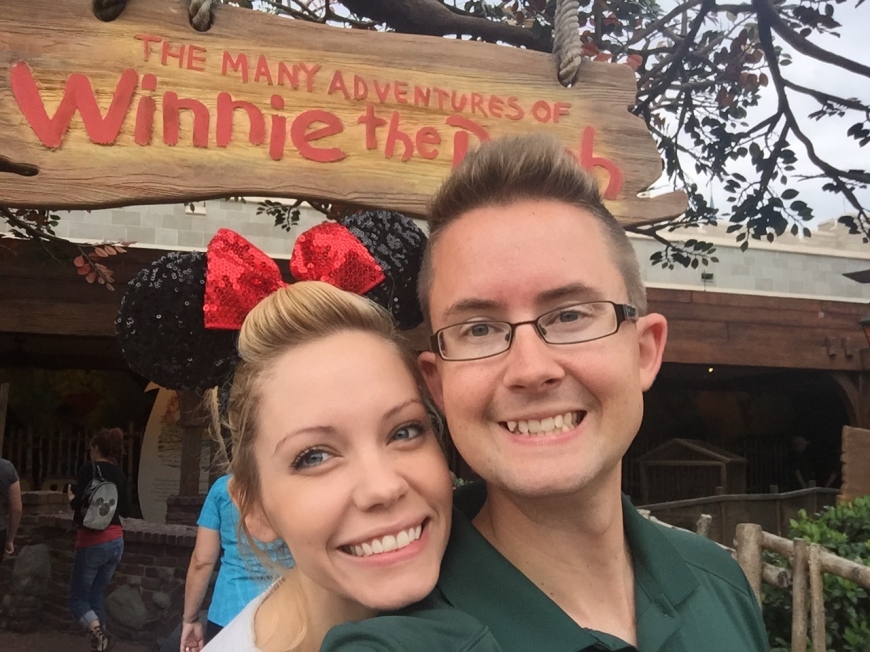 We headed to Frontierland after Fantasyland, giving ride-alongs and chatting occasionally with other Disney Periscopers {sidenote: every time someone from Brazil would join in with a, “Hi from Brazil!” Tim and I would both fight the urge to chant, “Brah-zil! Brah-zil! Brah-zil!” They love to do that in Disney, for some reason.} After a plunge down Splash Mountain, we decided a mid-morning snack would be nice. And what makes for a better mid-morning snack than french fries? I know! You can’t think of anything, right?! And also, FYI, Periscoping sucks up a lot of battery life!

Next we spent some time in Tomorrowland {“Paging Mr. Morrow, Mr. Tom Morrow”} and, like Anna, for the first time in forever, Tim beat me on Buzz Lightyear Space Ranger Spin. My gun must have been broken or something. Or he was asking all my tips and prime targets as we were going…

Bitter party of one? Oh yeah, that’s me.

On the way out of Magic Kingdom, Tim grabbed a legit iced coffee and I blew a kiss to my castle-away-home on our way down Main Street.

We hopped the monorail and transferred at the Transportation Center for a ride back to Epcot. We had lunch reservations at Via Napoli that we didn’t want to miss!

The first thing we did in Epcot was hop in the single-rider line for Test Track. Right as we were about to get through seatbelt check, we were stopped because of incliment weather. Luckily, they sent both of our cars through before the bottom let out. We waited out the hard rains in Mouse Gear, and once it let up a bit we tread water over into World Showcase and wasted time in Mexico. 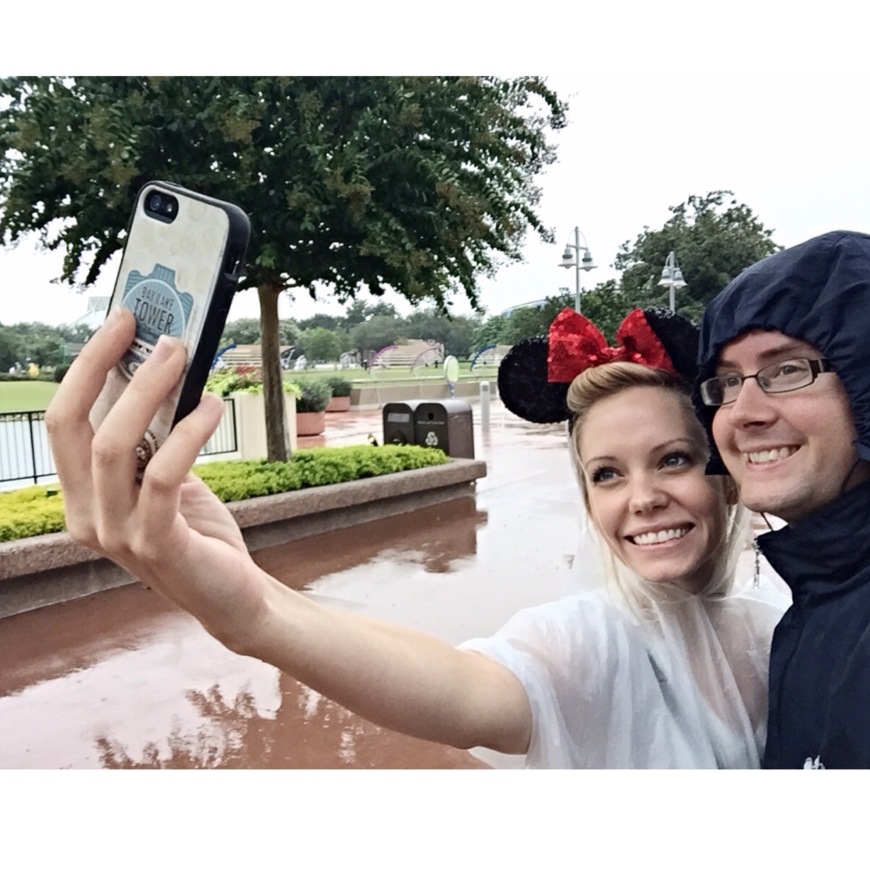 We had the best time in Mexico! We rode the Three Caballeros and then as we were getting off, a mariachi band started to play in front of San Angel Inn. We watched them for a moment, and just as we were about to step away to head towards Italy, the front-man called Tim out of the crowd. He acknowledged his birthday button and asked if they could sing him a traditional Mexican birthday celebration song, followed by Happy Birthday. Of course, Tim jumped at the chance! We were both all smiles, and Tim did not skip the chance for a mariachi Birthday selfie! 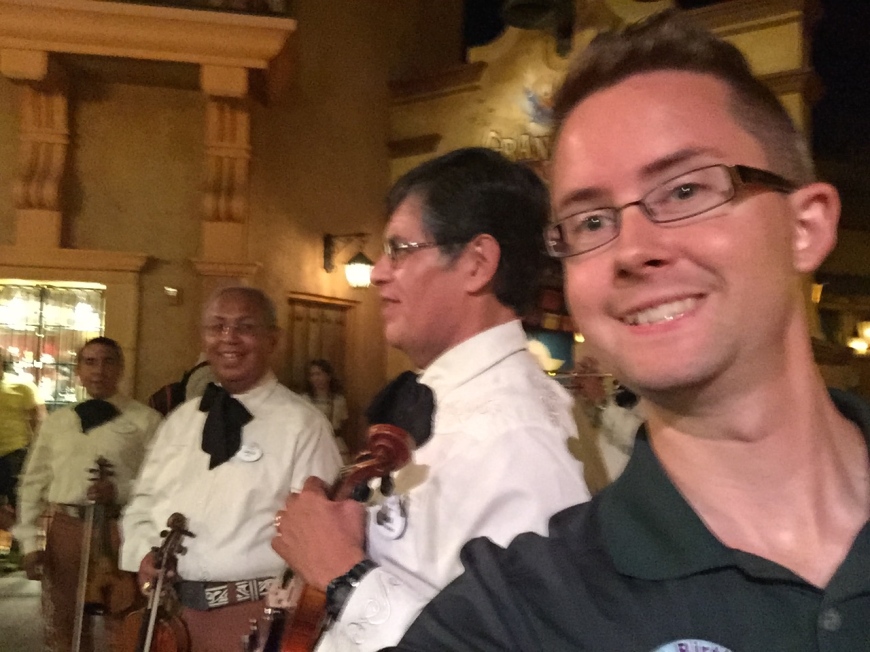 Once that bit of Disney magic fizzled out, we tromped our way through accumulating puddles to Italy. We were hoping the rain would have let up by now, but instead, it was only letting us down. We made it to Via Napoli almost without event, as long as you don’t include the moment where Tim almost slipped and busted his butt outside of the restaurant! So scary.

Even in arriving super early for our reservation, we were seated somewhat quickly. We love Via Napoli. This was our fourth time dining there and we were looking forward to splitting a pizza to wait out the rains.

This is my Minnie Mouse Bachelorette Pensive Pizza picture for all you fellow trash TV consumers. Imagine a voiceover of me saying something like, “I feel like the luckiest girl alive, but this journey is so much harder than I ever expected. I am truly here to find the perfect slice of pizza and I have confidence that my future dinner is in this room.”

Now the picture above is basically the epitome of our experience. Empty plates. And not in the good way. Once again, we have never experienced this type of service at Via Napoli. We have always had the best wait staff here; so friendly, helpful, and conversational. Remember how I said in my last post that we had even had a waiter share with us the inauthentic menu items they provide?

Well, this time we had Anna Kendrick serving us {and that is meant as no disrespect. I should have gotten a picture of her, she seriously looked just like Anna Kendrick, only she possessed that thick Italian accent common to the pavilion}. She was sweet as can be, but something went wrong in communications with hot-mouthed ‘ol Vesuvio over there, and we waited forever for our pizza. Things got awkward and she acknowledged the wait and apologized and said our pizza should be coming right out. It did. It was wrong. It was sent back and then we waited even longer than the first time for the second one! If it hadn’t of been raining, we might have been upset, but surprisingly we were pretty serene. Finally, it came and Anna {no that wasn’t really her name, I’m just calling her that} informed us that our whole meal was comped because of the inconvenience!

We braved a little more time {and Tim a second chocolate croissant from France} before heading back to the resort to pick up our bag and head to the airport. The rain never did let up all the way, even as we boarded the Magical Express for the second time in twenty-four hours.

These were our sad faces, not only because we were leaving, but because that ride back to the airport made both of us so motion sick! Bleh!

Unfortunately, our plane was delayed by a whopping two and a half hours! Tim was pretty stressed out, seeing as how he had to be at work the next morning at 6:30am! We made it home though, safe and sound, knowing that in just a few short hours it would be back to reality as his iPhone alarm woke him and three little toddler alarms woke me.

It seriously took us two good nights of sleep to catch up on what was lost during his birthday celebrations, but it was so worth it. Spending time with the man that makes me incandescently happy at the Happiest Place on Earth is a beautiful thing. I am truly grateful that we get to live such a wonderful life.

“I wish I had a million dollars. HOT DOG!”

P.S. See. That random It’s A Wonderful Life quote at the end is the perfect example of my late night brain wanderings. You’re welcome. Maybe, “George Bailey, I’ll love you ’til the day I die!” would have been more appropriate…I’ll let you decide.